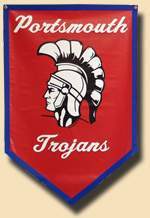 Portsmouth looks to rebound Friday after a gut wrenching 38-14 loss to Rock Hill a week ago, which left the Trojans with a 2-4 record and a 1-2 conference mark.

Weather was a factor last week as the Trojans had problems holding onto the ball. After trailing 18-6 at halftime, the Trojans only had the ball three times in the third quarter — all three touches resulted in turnovers.

“The weather was a factor but that’s not an excuse, it looks like we are going to have some more of that (this week),” Trojans head coach Aaron Duncan said. “It looks like another rainy night.”

With an 80 percent chance of rain Friday night, Portsmouth is concentrating on its fundamentals this week, including ball security.

“This will be five out of seven games that has rained,” Duncan said. “We should be pretty well versed in playing in those conditions but last week, it didn’t look like we had ever played in them. We were pretty bad with the turnovers.

The Trojans are facing a Pointers’ team that has had their own problems this season. South Point is also 2-4 on the year and according to Duncan, injuries have been a major story in the Pointers’ season.

“South Point played Minford at the beginning of the year and watching some film on South Point from the beginning of the year, they have a lot of new numbers, which means they suffered injuries early on and they’ve been missing a lot of their kids,” Duncan said. “They are in a transition year. Their program has been in a down period and they’ve got a brand new coach.”

The Pointers are going to run a 50 defense (five defensive lineman) while playing power football on the offensive end.

“They are kind of a version of Ironton,” Duncan said. “They have some big strong runners. They make no bones about it. They want to establish the power game and run off tackle.”

Friday’s match-up could be considered a pivotal time in Trojan football. Duncan is the third head coach in four years and the program has not won more than three games in any of those seasons.

“They’ve got to learn how to win,” Duncan said. “They haven’t experienced very much winning. There were some high expectations but we also knew there would be some growing pains in the transition.”

Portsmouth will look to take the next step in that transition Friday at Trojan Coliseum. Kickoff is scheduled for 7 p.m.