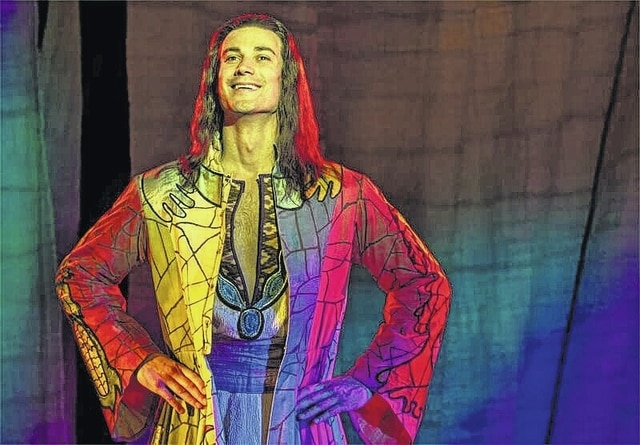 The hit Andrew Lloyd Weber musical “Joseph and the Amazing Technicolor Dreamcoat” will be gracing the Vern Riffe Center for the Arts stage later this week, kicking off the Southern Ohio Performing Arts Association’s (SOPAA) Broadway package of three musicals.

The musical recounts the biblical story of Joseph, whose fortunes seem to always rise and fall. Even after being enslaved, and later imprisoned, his ability at dream interpretation and work ethic see him become the second most powerful man in Egypt.

Having foreseen and prepared for a famine, Joseph is in a position to punish his brothers for their crimes against him, when they come to purchase food. Instead, he forgives them and is reunited with his family.

“’Joseph’ is a good show for the greater Portsmouth community,” Vern Riffe Center for the Arts Director Joe Patti said. “Many people have some familiarity with it because a few of the area schools have done it over the last few years. Not to mention that the Biblical story of Joseph is well known to people.”

Catchy songs like “Go Go Go Joseph,” “Any Dream Will Do,” and “Close Every Door,” span many musical styles. Combined with the family friendly content and themes, the show has remained popular for over 30 years.

“What is really fun about the show, and has helped it remain fresh for so long, is that it uses so many musical styles,” Patti said. “Probably the most memorable is the Pharaoh as Elvis. Not only does he sing his songs in that style, productions often have him costumed as “The King” and adopt some of Elvis’ swagger. There is also rock, western, calypso, Charleston musical styles.

To engage the audience in conversation, and to get them more interactive in the show’s history and topics, SOPAA and SSU have prepared packets for guests.

Trivia about the history of the show, a study guide on biblical basis of the story, and pictures of the dreamcoat for kids to color, are all available for download on the SOPAA (www.sopaa.org) and Vern Riffe Center (www.vrcfa.com) websites.

“We don’t often have shows on Sundays, but that was one of the only dates available. Given the content of the show, we thought it would be suitable to have it on a Sunday. Also, the run time of the show isn’t very long. It is likely to be over by 9:30,” Patti explained. “So, it is not only suitable for families content wise, but you don’t have to be worried about getting home too late on a Sunday night either.”

Tickets and information are available 10-5 p.m. at the McKinley Box Office, 740-351-3600. Information and tickets are also available online through Ticketmaster at www.ticketmaster.com/venue/41868 or any TicketMaster outlet.