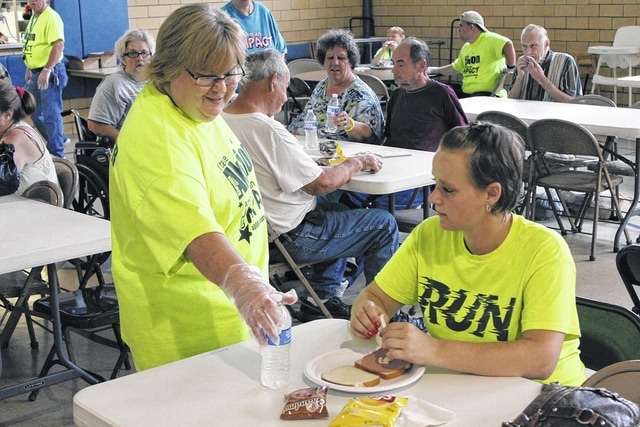 The Portsmouth Kiwanis Aktion Club and the !MPACT Team, of the Scioto County Board of Developmental Disabilities (SCBDD), are celebrating their many members who helped them cross over 10,000 volunteer hours since their inception in 2012.

The success is a large one, considering the groups had just over 5,000 hours logged as of 2014. The members of the groups have even logged nearly 2,000 hours since July alone.

The Portsmouth Kiwanis Aktion Club is a branch of Kiwanis for adults with developmental disabilities. The organization follows the motto of “where development has no disability” and serves 12,000 members worldwide.

!MPACT is a similar group the SCBDD organizes.

Everything the local groups do is under the direction of SCBDD employee KC Chatfield. Chatfield assists in organizing events and volunteer opportunities for the members of both groups.

Some of the places members volunteer at include United Way’s literacy program, to read at the Carousel Center, Portsmouth East Elementary School, and Northwest Elementary School; adopting the Lock 48 Historic Site on Ohio 104 in McDermott for cleaning purposes; helping the Boy Scouts of America with maintenance of Camp Oyo; volunteering in laundry services at Southern Ohio Medical Center; participating in music outreach; handling meals for Minford Elementary School; and so on.

“Our biggest projects are with the Salvation Army. In addition to helping to serve the free community lunch one day a week, we also ring bells during the Kettle campaign,” Chatfield said. “Last year, 2014, in 28 hours of bell ringing, we gathered $3,720.15 in donations. That works out to an incredible $132.86 per hour. On Christmas Eve alone we gathered an amazing $735 in just four hours.”

The Salvation Army has given much praise to both groups, for all of the work they accomplish, especially the work done at around Christmas.

“The !mpact and Aktion teams are always bright and cheerful. They have the greatest smiles on their faces and know exactly what Christmas is all about. Through the energy and sincere joy they bring to bell ringing, they communicate the mission of the Salvation Army: love towards all and service to those in need,” a Salvation Army official stated last December.

To learn more about the programs and services available through the SCBDD, visit them on the web at sciotoountydd.org, follow them on Facebook at Scioto County Board of DD, or on Twitter @SciotoDD.