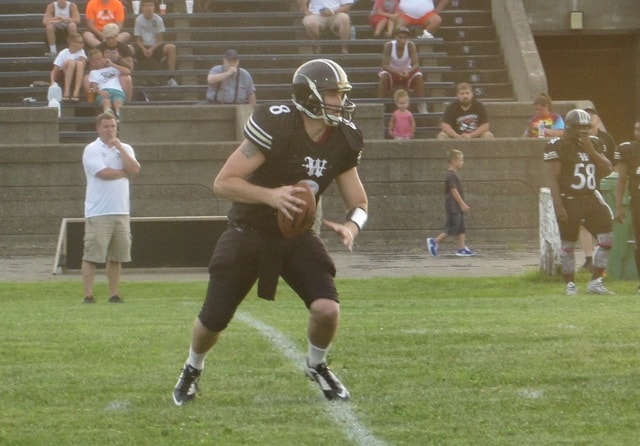 As the fourth quarter began on Saturday night at Spartan Stadium, the Portsmouth Warriors could feel the momentum slipping away. The undefeated Butler County Broncos were within a possession of tying the score, and appeared to have recovered a crucial muffed punt to keep a drive alive.

Luckily, Snook Martin was on the field.

The Warrior veteran ripped the ball away from the Bronco scrum and scampered 40 yards for a touchdown. From that point forward, the Portsmouth lead never dipped below nine points, and the Warriors (7-1) held on for a 41-20 victory.

No team seemed to be able to separate themselves early in the game, as both the Warriors and the Broncos (7-1) traded touchdowns until early in the second quarter. Each team scored on their first two possessions, and Mark Dheel’s extra points proved to be the difference for a slim 14-12 Warrior lead.

But as the clocked ticked toward halftime, Portsmouth began to take control. The Warrior defensive line — which hounded Bronco quarterback VJ Anderson for eight sacks on the evening — forced a fumble inside the Butler County red zone, which Martin recovered. Three plays later, Warrior quarterback Justin Lunsford found Santonio Wilson for a touchdown pass for the second time on the night to give Portsmouth a 21-12 lead.

After a Butler County three-and-out, Warrior running back Jontez Jones bounced a carry outside and took it 65 yards to the end zone to give Portsmouth a commanding 28-12 halftime lead.

Jones finished the first half with 131 rushing yards on just 11 carries.

But as the second half got under way, the Warriors seemed to take their foot off the gas. Portsmouth wouldn’t score an offensive touchdown in the second half and were limited to just 75 yards of total offense.

“Something happened with the blocking schemes,” Rice said. “We’ll fix it, that’s for sure.”

The Warriors also seemed to get in their own way with a myriad of penalties. Portsmouth had 60 yards of penalties in the second half, not including a number of personal fouls that were off-set by Broncos’ own fouls.

The biggest of those blunders came midway through the third, when the Warriors were called for a personal foul after allowing the Broncos to convert on a fourth-and-one. The penalty put the Broncos deep in Warrior territory and set up a 24-yard touchdown reception by Paul Jones. Roblow Givens’ run on the two-point conversion cut the Portsmouth lead to just eight points.

“We played hard, we didn’t play very smart. That’s the main issue with us,” Rice said. “We’re our own worst enemy at times and it drives me crazy.”

Jones was the game’s leading receiver with 198 yards on six catches.

However, Martin’s punt return gave the home team some breathing room, and the Warriors then went to work milking the clock. Late in the second half, Portsmouth got a boost from an old friend — Justin Shankwiler, a thousand-yard back from two seasons ago. He picked up 26 yards on five carries, including a few first downs to help keep the clock moving in the fourth quarter.

“He came and gave us a little depth,” Rice said.

With the game all but decided, Charles Johnson intercepted a pass on the final play and took it in for the Warriors’ final score.

The win insures that the Warriors will remain in first place in the Blue Collar Football League Eastern Conference by virtue of a tiebreaker with the West Virginia Lightning. With a win next week over cross-town rival Southern Ohio Spartans in the season finale, the Warriors will clinch home-field advantage throughout the postseason.

Kickoff for next week’s game is currently scheduled for Saturday at 7:30 at New Boston Stadium.