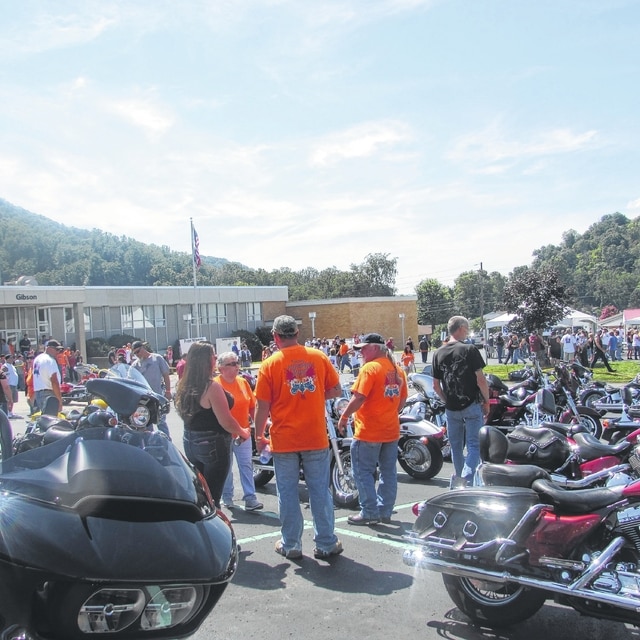 The parking lot of the East Campus of Southern Ohio Medical Center (SOMC) which houses the Hospice Program, was fully loaded with more than 450 motorcycles for the 2015 SOMC Memorial Ride held Saturday. The event provides an opportunity for riders to honor the memory of a loved one that has passed on.

“Today is our sixth annual SOMC Hospice Memorial Ride. It is a 75 mile round trip memorial ride which started six years ago in 2009 in memory of Ricky Bryan, and what it does is raises funds for our patients and their families, and our patients are all terminally ill patients,” Hilbert said. “One of our patients (Bryan) in 2009 had an idea to have a Memorial Ride, and so in memory of him we started this Memorial Ride, and it has just kind of snowballed ever since then, where we had about 50 to 60 bikes the first year, we are at about 400 to 450 this year.”

SOMC Hospice is a not-for profit organization, and many volunteers and Hospice staff come out to help navigate the details of the Memorial Ride event. Live music was also provided by the Don Smith Band.

“All 100 percent of the proceeds benefit SOMC Hospice. We do have a lot of area sponsors that help contribute to the event, a lot of local businesses,” Hilbert said. “We are at about 30 local businesses that have made contributions to make this event possible. It is remarkable, every year I am shocked, that’s for sure. It is great to see a community support another community organization, with 100 percent of the proceeds going back into the community, and to see so many support something that they, themselves may be a part of some day, or at some point in their lives is fascinating.”

“We are trying to break $50,000. Last year we were at about $37,000 to $40,000, but I trying to make it $50, 000 this year, but we will not know that until later on today. It is phenomenal to see people come out like this, and offer this amount of support,” Hilbert said. “SOMC Hospice holds a very special place in people’s hearts, and so to see people come out in this fashion, we say thank you to the Southern Ohio community.”

“We are absolutely thrilled by the turn out. This is the first year, in about three or four years that we have had sunshine, so the weather has just been beautiful,” Ruby said. “This is one of the best events that we do. A lot of folks come out, and ride in memory of someone that they have lost at some time, and when they all line up, it is just something about it. It is an awesome event.”