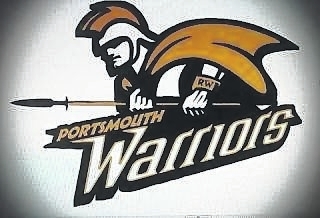 He may no longer be playing on the field, but John Throckmorton is still a Warrior — in every sense of the word.

Throckmorton is one of the original Northeast Kentucky Warriors, having been a part of the team since day one in 2010. His tall frame made him a natural fit at receiver, but a high motor and a passion for contact landed him on the offensive line as a tight end.

In four years of football, Throckmorton helped turn the Warriors from a fledgling new franchise into a league power. He made his mark almost immediately, as he was named a Semi-Pro All-American and a Hall of Famer for an outstanding 2011 season.

By the time he helped lead the team to a conference championship in 2013, he had grown into a fan favorite and played nearly everywhere on the field. In addition to tight end, Throckmorton also spent time at receiver, full back and even played a few games on defense. After four year with the Warriors, he had been named an All-Star three times.

But after four years of service to the Warriors, Throckmorton decided to answer the call of service from a higher power — his country. After the 2013 season, he joined the U.S. Army. On May 3, 2014 he led the Warriors on to the field for what proved to be the final time in a game against the Carter County Wildcats. Less than a month later, Throckmorton was in Afghanistan with his unit.

While in Afghanistan, Throckmorton traveled from Bagram to the northern part of the country to collect and return equipment to a central location. He estimates that his work helped save the Army millions of dollars.

“It was actually pretty peaceful where we were at,” he said.

The Warriors didn’t forget their teammate while he was away. The team temporarily retired Throckmorton’s number (81) while he was away, and dedicated their conference championship season to him. Before every game, the team made sure to honor Throckmorton and thank him and all military personnel for their service.

Throckmorton is still an active member of the US Military, but since returning home he’s began to think about his career down the road. One of his Army buddies convinced him to look into law enforcement, and Throckmorton recently cleared the first step to becoming a member of the Portsmouth Police Department. He still needs to pass Police Academy, but he feels up to the task.

“It’s like basic training all over again,” he said.

Though Throckmorton has been busy serving his city and his country, he still finds time to serve the Warriors. His playing days may be behind him — “My career comes first,” he says — he finds the time to show up to practices and games. He even makes himself available to the Warrior coaching staff in case they ever need extra help.

“It’s fun to get back with some of my friends,” he said.

“I’m itching every day, but these guys do a great job,” he added. “(The Warriors) have so much talent that I don’t think they miss me at all.”

Obviously, the Warriors beg to differ.