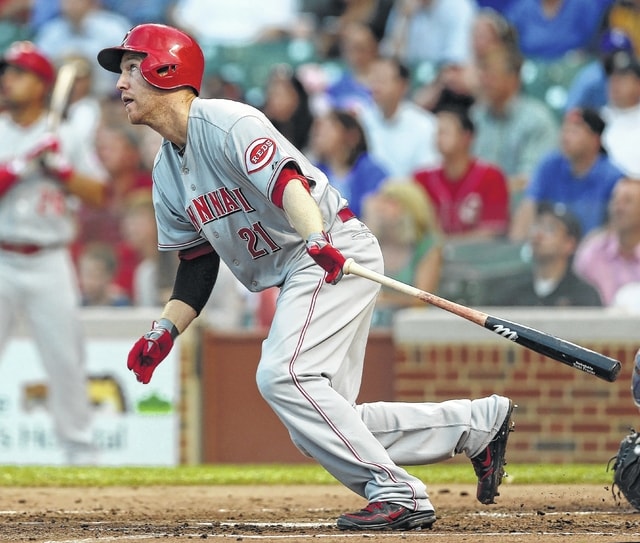 CINCINNATI — In a time-honored tradition, managers of both the American and National League All-Star teams met with the media on Monday to reveal the line-ups and starting pitchers ahead of Tuesday’s Mid-Summer Classic.

Todd Frazier, the Reds lone starter, will bat second behind the Pirates’ Andrew McCutcheon in the National League lineup.

“He’s just so strong, and does such a good job at third base,” Giants coach and NL manager Bruce Bochy said. “Incredible talent, a guy who just keeps getting better and better.”

Zack Greinke of the Los Angeles Dodgers will start for the National League. At 8-2 with a 1.39 ERA, Greinke earned the start over the likes of Madison Bumgardner, Jonathon Papelbon and Carlos Martinez.

Greinke last pitched on Thursday, and hasn’t allowed a run in his last five starts.

“We had some great starters, but the numbers (Greinke) put up are unbelievable,” Bochy said.

Royals coach Ned Yost selected Houston pitcher Dallas Keuchel as the AL starter. Keuchel has already earned 11 wins this season with a 2.21 ERA. He last pitched on Saturday in a loss to Tampa Bay.

“It was definitely very exciting. I never expected this. Just to be on a team with some of the best players in the world is truly an honor,” Keuchel said.

The 2015 All-Star game will take place on Tuesday at 7 p.m. at Great American Ball Park.

Fire the Cuban Missile? In addition to Frazier, Cincinnati will also be represented by closer Aroldis Chapman. Having not pitched since he picked up his 18th save with a perfect ninth inning on Friday against Miami, Chapman should be be available to pitch. However, with so many stars in the bullpen, there’s always the chance that Bochy may not choose to use Chapman.

“The plan isn’t to get everyone in as much as used to be, there is a lot at stake,” Bochy said when he was asked about managing in the All-Star Game.

Though nothing is guaranteed, Chapman is holding out hope that he’ll get his chance to shine at his home stadium.

“I’m looking for that opportunity,” Chapman said through a translator. “Every time that door opens (at Great American Ball Park), the fans go crazy and I like that. I look forward to that.”

“First he has to get in the game, you can’t take for granted that he’s going to get in,” he said. “He’s a special player, he’s a special talent. You could say once in a generation.”

For Pete’s Sake: Since it was announced that Cincinnati would host this season’s All-Star Game, Pete Rose has proven to be the 800-pound gorilla in the room. Formally banned from all MLB activities, many Reds fans hoped that the “Hit King” could use the game as a platform for a reinstatement bid. While the recent revelation that Rose had bet on Reds games as a player may have derailed his bid for the Hall of Fame, he will still play a roll in the week’s festivities.

“I grew up a Reds fan to be honest. I was a big fan of the Big Red Machine,” Bochy said. “I know how popular he is in this city. We’ll welcome Pete…he’s part of the city, part of the history.”

“He’s a god in this city…he deserves everything he can get,” he said.

“That’s up to Major League Baseball and the commissioner’s office. I have no say in it, I have nothing else to say about that subject,” he said.

“I think it’s a no brainer,” Bumgarner said. “He got a 1-something ERA. He’s the Greg Maddox of our era.”

All-Star Jitters: Chicago Cubs rookie phenom Kris Bryant didn’t make the trip to the Windy City once spring training concluded. However, barely two weeks into the season and Bryant received the call from the big league club. Once a promising prospect, Bryant has become an All-Star in his first official major league season.

“I can’t put it into words what it’s like,” Bryant said. “I never set out for this to be a goal of mine but it’s a pretty cool feeling. I’m having a lot of fun with Anthony (Rizzo, teammate), he’s been great for me. My teammates have been great. It’s just been a real good experience so far and I’ve just really been enjoying it the last couple of days.”