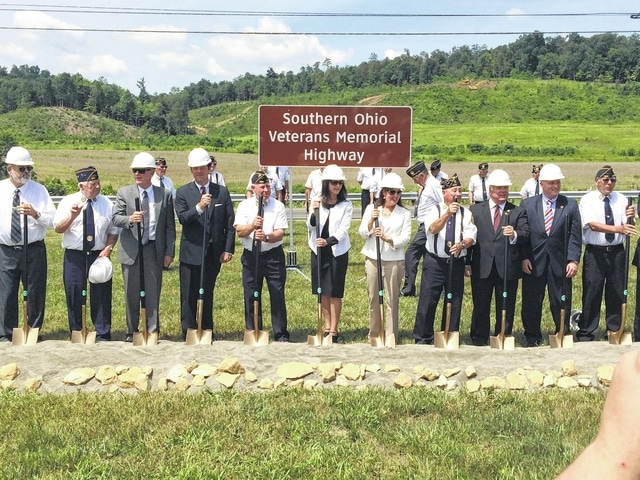 Wayne Allen | Daily Times A ground breaking ceremony was held for the Southern Ohio Veterans Memorial Highway on Wednesday. The ceremony was meant to serve as a visual representation of the beginning of work on the project.

A ground breaking ceremony was held in Minford on Wednesday for the Southern Ohio Veterans Memorial Highway. The ceremony was meant to serve as a visual representation of the beginning of work on the project.

Among the many speakers during the ceremony were Scioto County Commissioners Mike Crabtree and Bryan Davis, Scioto County Engineer Craig Opperman, along with State Representative Dr. Terry Johnson and State Senator Joe Uecker. The keynote speaker for the ceremony was Ohio Lieutenant Governor Mary Taylor.

Taylor called the significance of the ceremony a good day for southern Ohio. She said the Southern Ohio Veterans Memorial Highway is the largest project the Ohio Department of Transportation (ODOT) has ever taken on and the first Public Private Partnership (P3).

In 2012 the state legislature passed a measure allowing for ODOT to enter into Public Private Partnerships (P3). P3 allows ODOT to partner with developers and get projects finished sooner. The successful P3 advances the completion of the project by an estimated 17 years and allows area residents to use the highway sooner rather than later.

“This project is so much more than a construction project. It’s opportunities for our community, it’s opportunities for our families and it’s an opportunity to strengthen the region,” Taylor said. “It’s really great to be here and be a part of not just a construction project, but one that will have a lasting positive impact on our families, this community and our state for many years to come.”

Once all costs are factored into construction and long term maintenance of the highway the roadway will cost the state an estimated $1.2 billion. ODOT has entered into an agreement with the Portsmouth Gateway Group LLC, to construct the highway. Once construction is complete the group will maintain the roadway for 35 years.

The Southern Ohio Veterans Memorial Highway is considered to be Ohio’s largest road construction project. There will be an estimated 25 million cubic yards of excavation, to make way for the roadway. The contractor has anticipated hiring 300 construction workers and 100 management personnel for the project.

As a part of the project all culverts on township and county roads affected by the project will be replaced over the course of the project. There will be 85 culverts equal to nearly five miles long. In making room for the highway some blasting work will need to be done. There will be 400 semi-truck loads of explosives used and there will be 260 miles of holes drilled for blasting.

The current schedule for opening the road to traffic is slated for December of 2018.