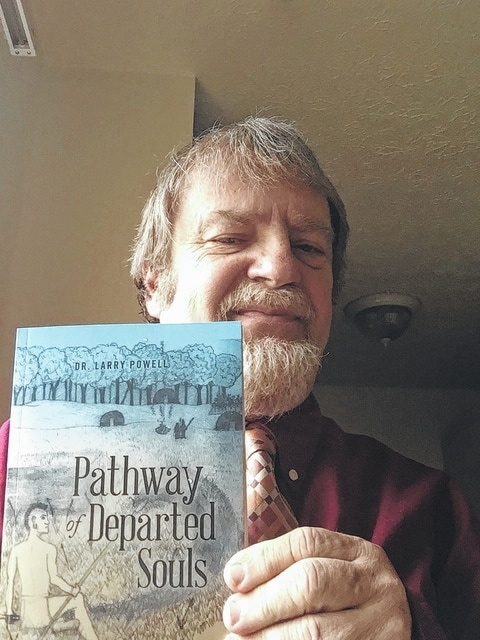 Dr. Larry Powell is what one might refer to as a dabbler in history. He is a lifelong educator, but always with one eye on Native American culture, and specifically the Hopewell culture who always wanted to read historical fiction about the Hopewells, but no one had written it – so he wrote it himself.

Powell has just released a book through Lulu Publishing titled “Pathway of Departed Souls,” and he will have a book signing on Saturday, June 20 from 11 a.m. until 3 p.m. at Market Street Cafe in Portsmouth.

Powell, who grew up in Twin Valley, graduated from Clay High School in 1966, spent three years at Ohio University Portsmouth Branch, a year at Ohio University in Athens where he graduated with a bachelor of science and education, taught at Rubyville Elementary, then received his masters degree from Xavier University and Phd from Ohio University. He has worked as a teacher and a principal, including a stint in Portsmouth.

Powell has spent an immense amount of time hiking, including the Appalachian Trail, and that’s where he became interested in the Hopewell history.

“I did a lot of hiking at the Mordecai Hopewell Farm in Chillicothe,” Powell said. “Even though Mound City is more famous, the stuff they pulled out of Mordecai’s farm ended up in Chicago at the museum and the British Museum has one of the biggest collections of Hopewell artifacts of anybody.”

Mordecai Hopewell, was a Chillicothe landowner on whose property mounds were excavated in the 1800s, and Powell got into the Hopewell history and that evolved into his writing of historical fiction of the Hopewell culture. In fact, he has already started book two, mainly about Chillicothe and he plans to feature a lot about that culture in the Portsmouth area in book three.

“Brad Lepper (curator of archaeology with the Ohio Historical Society), he’s the number one archaeologist in the state of Ohio, has found that there is a ceremonial road that goes from Newark to Chillicothe. It’s really wide. It’s not a travel road. It’s a pilgrim’s road,” Powell said. “I have talked to a lot of people who are very sure that same road, even though there’s not a lot of evidence of it, came all the way to Portsmouth.”

Historical fiction is just that, a cross between actual history, and fictional stories based on that history.

“The ‘Pathway of Departed Souls’ is my idea of their religion,” Powell said. “The Milky Way galaxy 2000 years ago, I know had to look like a road. It still does in some places, and so I envisioned them as thinking that their ancestors went up in the sky, became stars and that’s why they made the pilgrim’s road for those people.”

Powell said most people don’t realize that at one time the Portsmouth area had 20 miles of earthworks.

“We just think of Mound Park, but the one that really intrigues me is the one that was across the river – it was a medicine wheel, and it was the only kind of medicine wheel the Hopewell ever built,” Powell said. “So I’m thinking it has some kind of significance.”

Medicine wheels, or sacred hoops, are either a symbol of indigenous North American culture and religion, or stone monuments related to this symbol. The monuments were constructed by laying stones in a particular pattern on the ground oriented to the four directions

Powell said there are several things he wants readers to take away from his book.

“I want them to realize that the people that lived here were extremely intelligent and they weren’t savages,” Powell said. “I kind of despise the name ‘Indians.’ I think I have a little bit of Cherokee in me, but the stuff they did was just unbelievable. The size of the earthworks at Mordecai Hopewell farm, for example, was bigger than the coliseum and they did it with sticks and clamshell hoes. It’s just amazing the amount of people power it would take and why did they do it? We really don’t know.”

There is a reason Powell wants to spread the word about the Hopewell culture.

“There is one thing I want them to take away from it (book) and that is that they need to respect what these people did, because they were highly intelligent,” Powell said.

Powell said his book is available on the usual sites but prefers it be purchased through lulu.com. It will also be available at the book signing at Market Street Cafe.