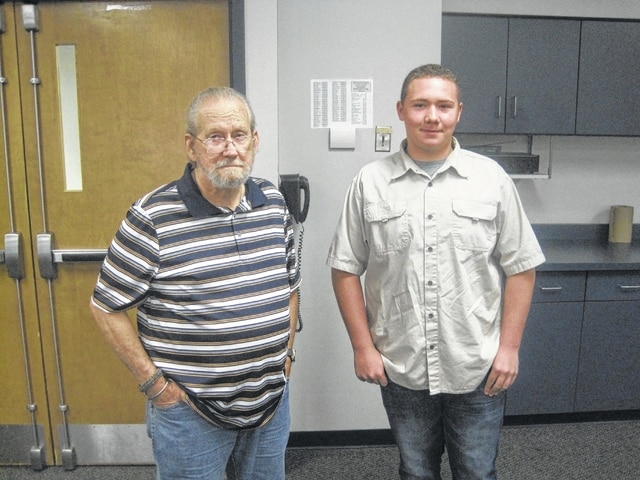 Photo by Frank Lewis | Daily Times MaKayla Boehm (center) receives a $100 Walmart gift card for winning first prize in an essay contest about an elderly person who influenced her life. To her right is her teacher, Lisa Brown, of Northwest Middle School and on her left, Kaye Inoshita, R.N.. Ombudsman Director for the Area Agency on Aging District 7, the organization that sponsored the contest.

Photo by Frank Lewis | Daily Times Jacob Keeton of Sciotoville Community Schools stands next to his grandfather, Larry Neal, just before receiving his second place prize in the “How an older adult impacted my life in a positive way,” essay contest sponsored by the Area Agency on Aging District 7.

MaKayla Boehm’s great uncle has become her surrogate grandfather and has been so important in her life she wrote an essay about him and took home first place in the “How an older adult imacted my life in a positive way” essay contest sponsored by the Area Agency on Aging, District 7.

“After my real grandpa passed away, he and my great aunt stepped up to raise me and my sisters,” MaKayla said in her essay. “He has also been a great father figure to me. I respect and appreciate anything and everything that he has done and will do for me and my family. I show my respect and appreciation by going down to their house and helping them clean, do laundry, watch the grandkids, help papaw out with work and take care of him when he’s sick.”

Accompanying MaKayla at a special ceremony Tuesday at the Department of Job and Family Services, was her eighth grade teacher at Northwest Middle School, Lisa Brown.

Second place went to Jacob Keeton, 14, of Sciotoville Community Schools, a student in Kristen Wawro’s class. Jacob was accompanied by his inspiration, his grandfather Larry Neal.

“I was around him while I was younger and he inspired me and he has taught me a lot of things,” Keeton told the Daily Times. “He has done a lot of things with me that my father didn’t really have time to do because he was working most of the time. I kind of got more inspired by him than by anybody else.”

Jacob said his grandfather taught him how to hunt, fish, build wood structures, carpentry and painting. Neal said it is enjoyable to pass on his knowledge to a member of today’s generation.

Keeton received a $50 Walmart gift card for his essay.

Kaye Inoshita, R.N.. ombudsman director for the Area Agency on Aging District 7, said the essays were to show respect and honor for an older adult; be interesting, clear and easy to read.

Inoshita told the Times June 15 is World Elder Abuse Awareness Day and urged all area residents to honor an elder by doing things such as carrying their groceries, cutting their grass, taking time to visit and taking them dinner or a bouquet of flowers. Inoshita said those wishing to show their respect for the elderly can run errands for them, plant flowers in their yard or even plow their garden as well as many other things to show them kindness and appreciation.